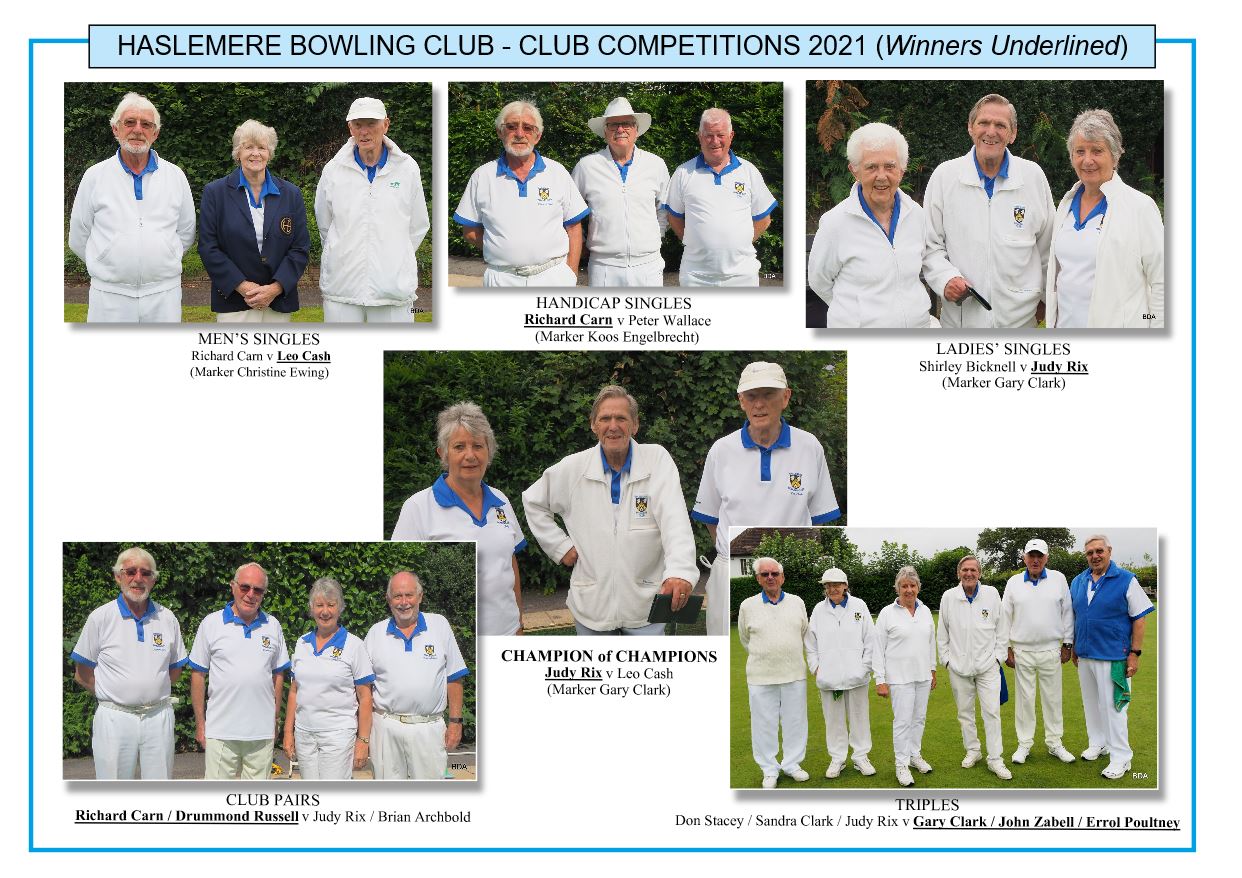 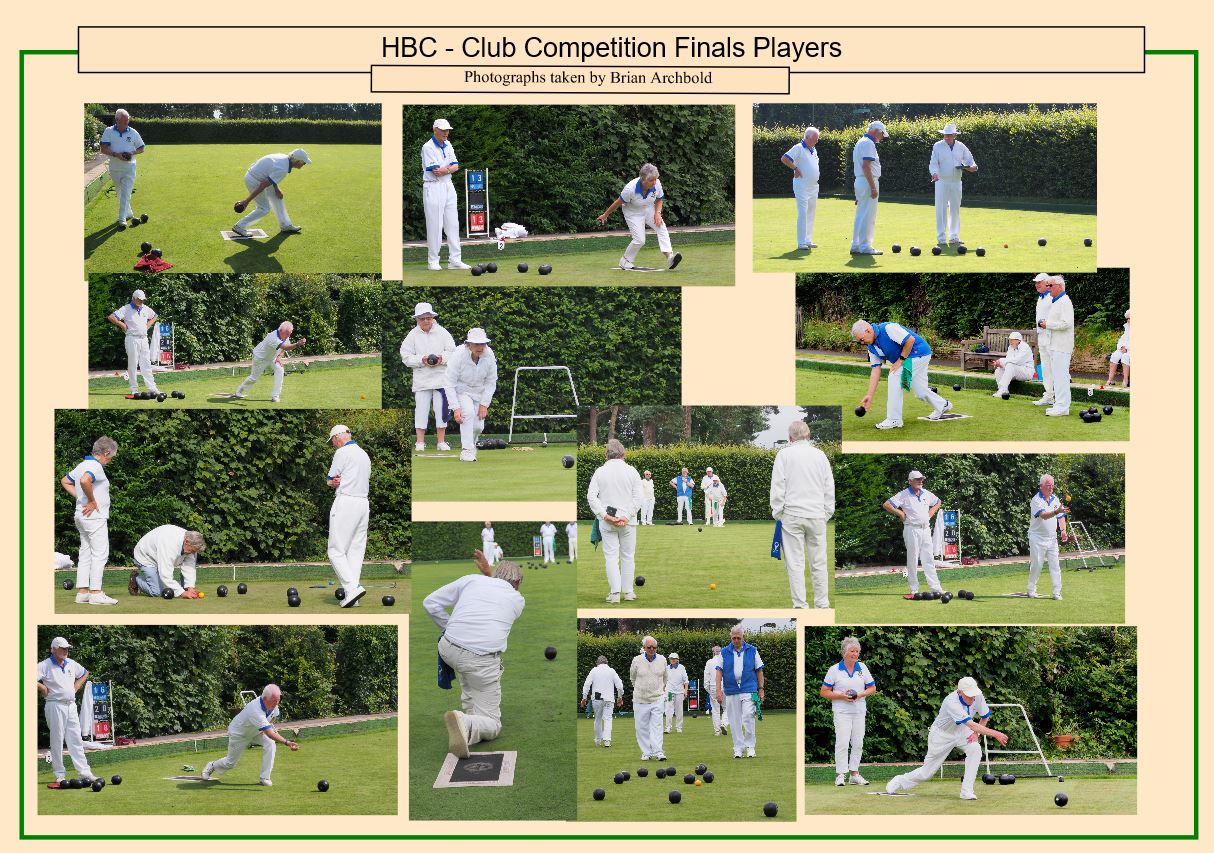 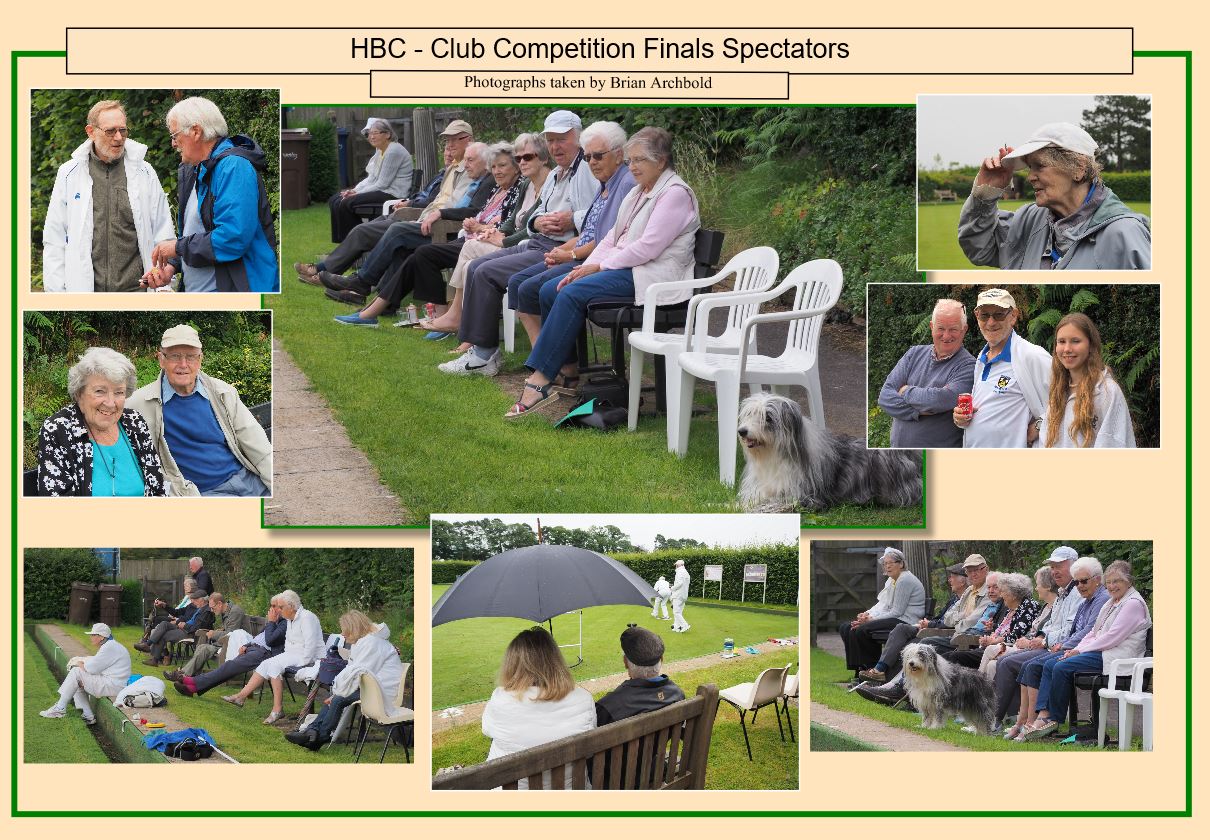 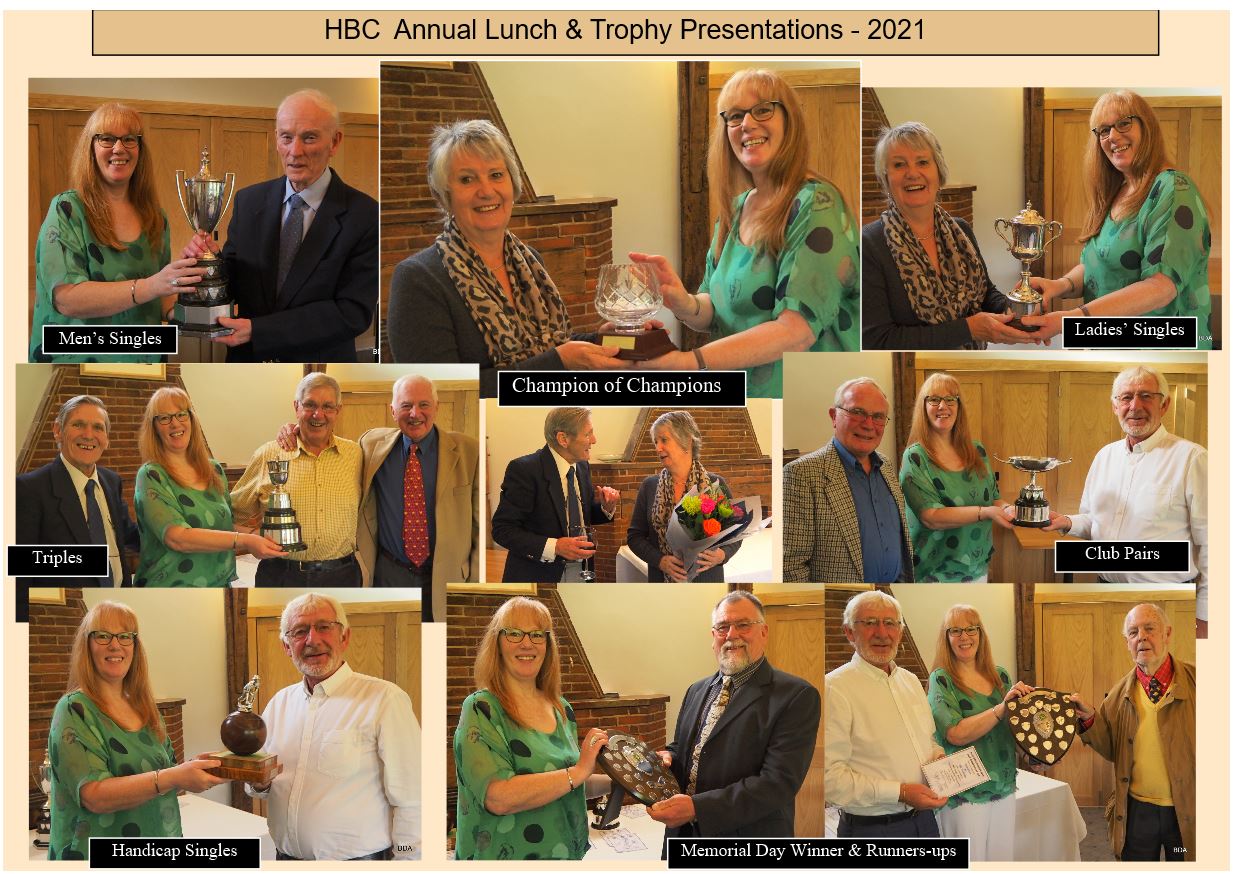 This year it was decided to hold a lunch for the club's annual get together and presentation of trophies and our president arranged a very enjoyable event at the West Surrey Golf Club. Our main sponsor Leighton Opticians & Hearing Care was represented by manager Lynda Skeldon who kindy presented our Club Competition Trophies to this year's winners. 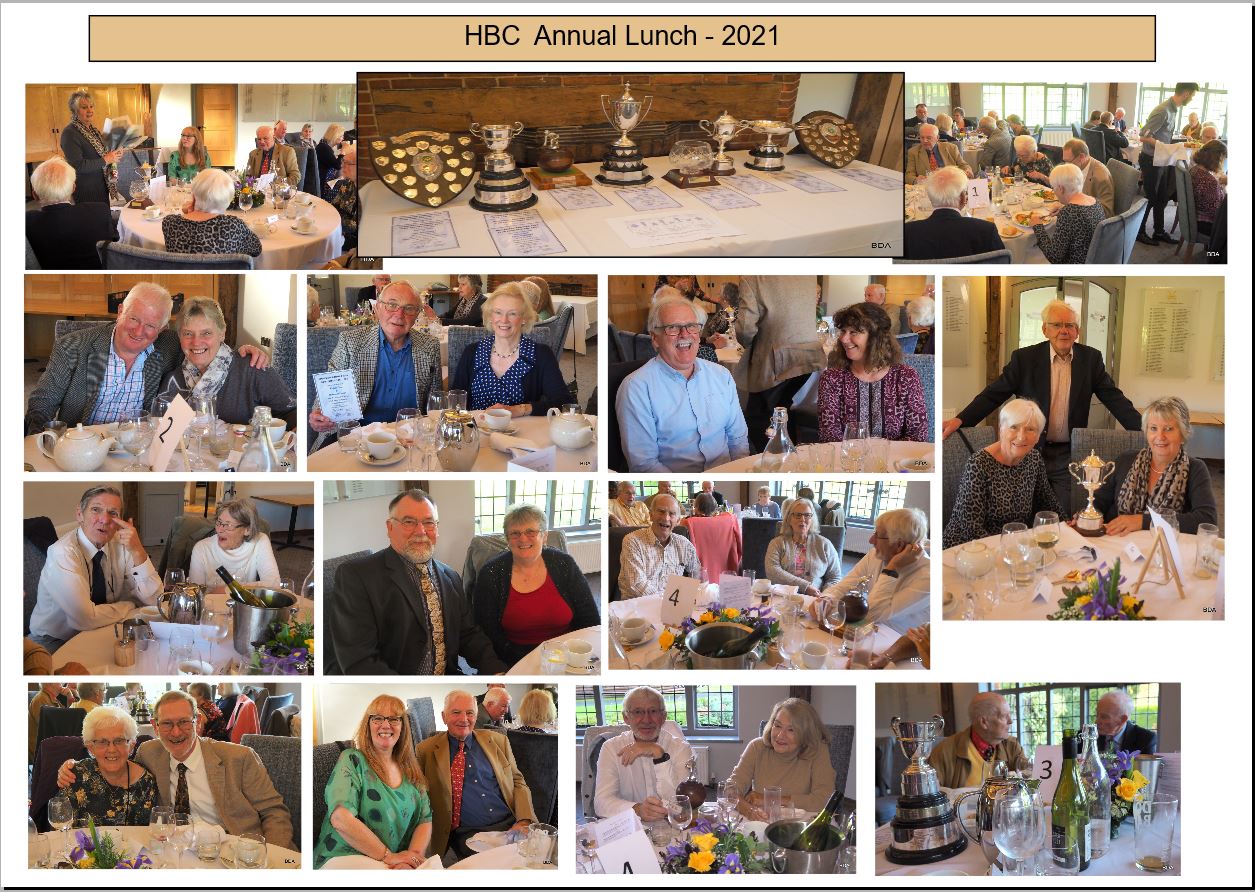 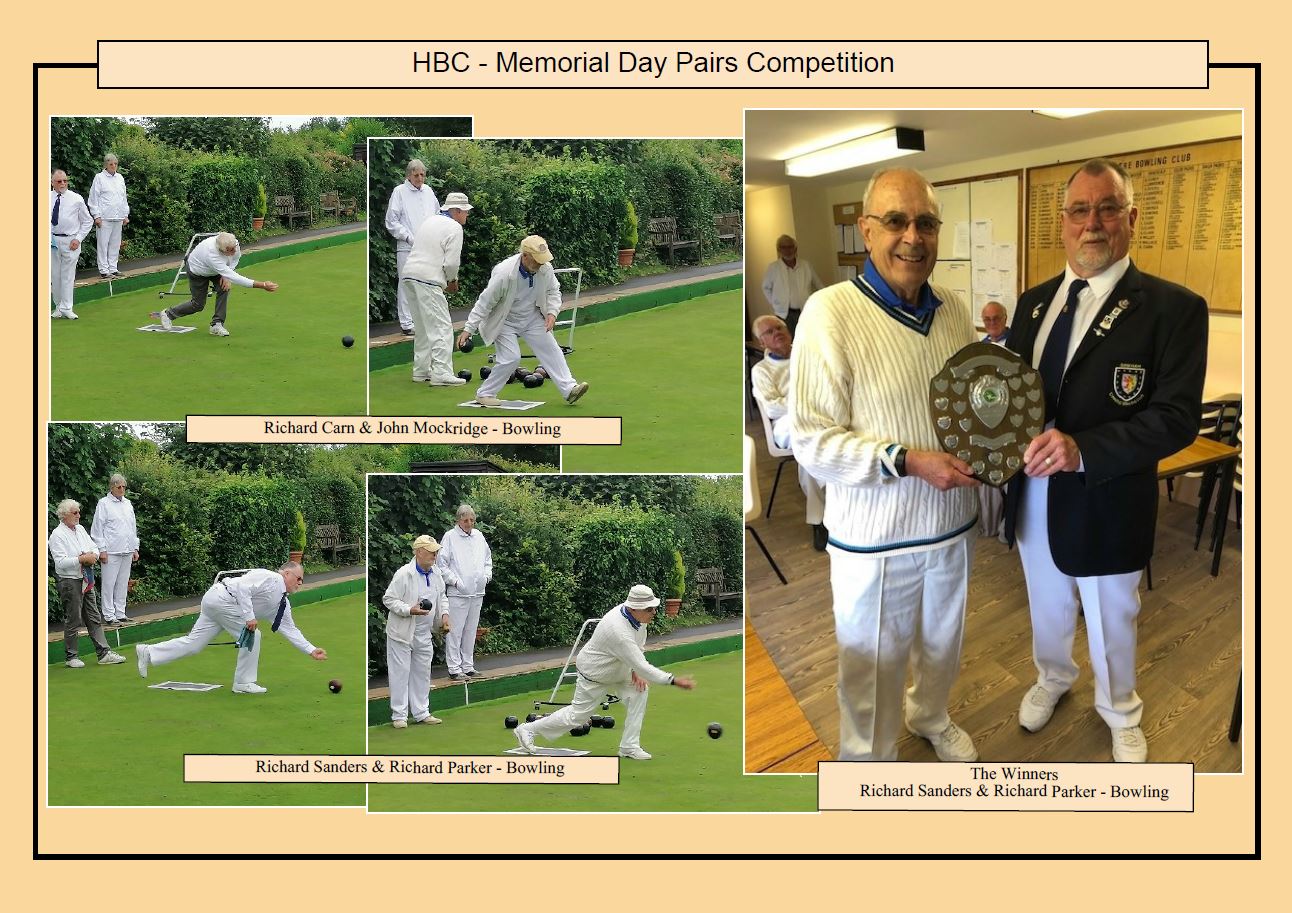 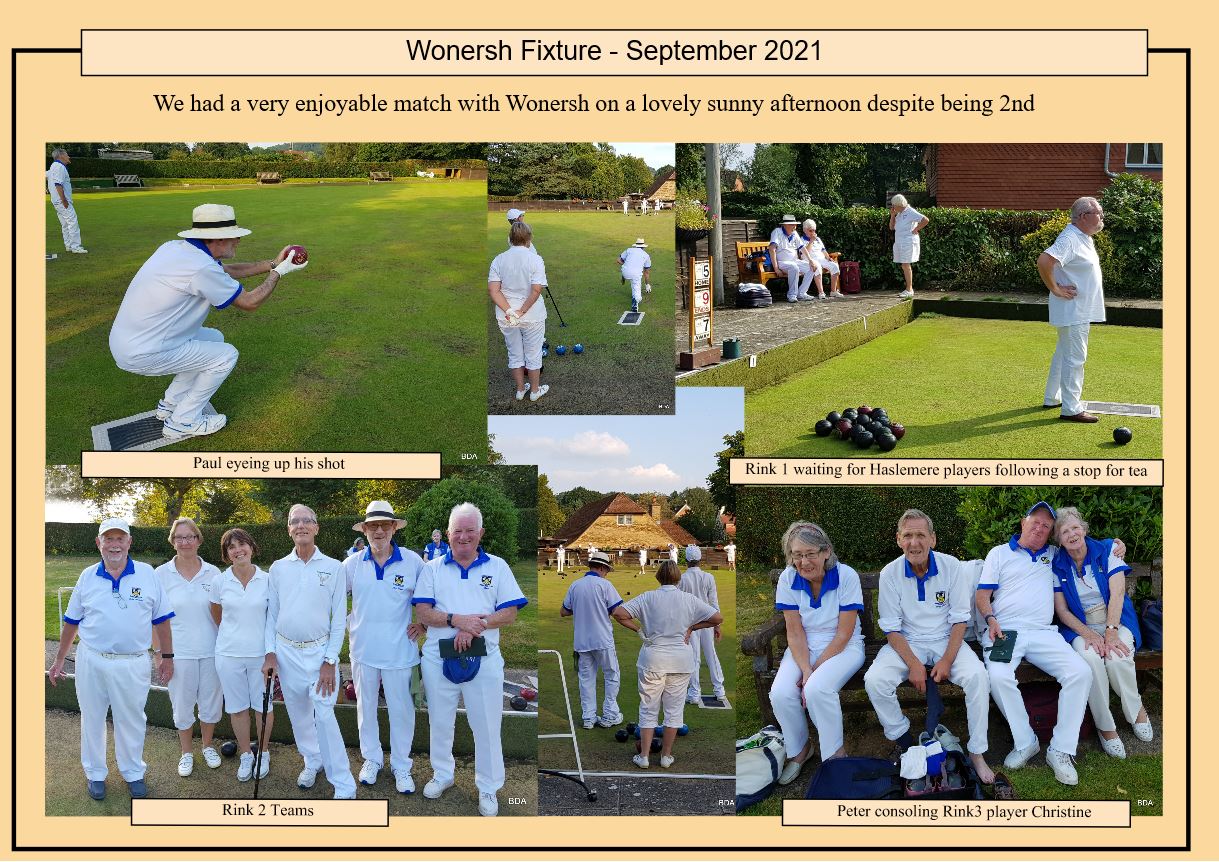 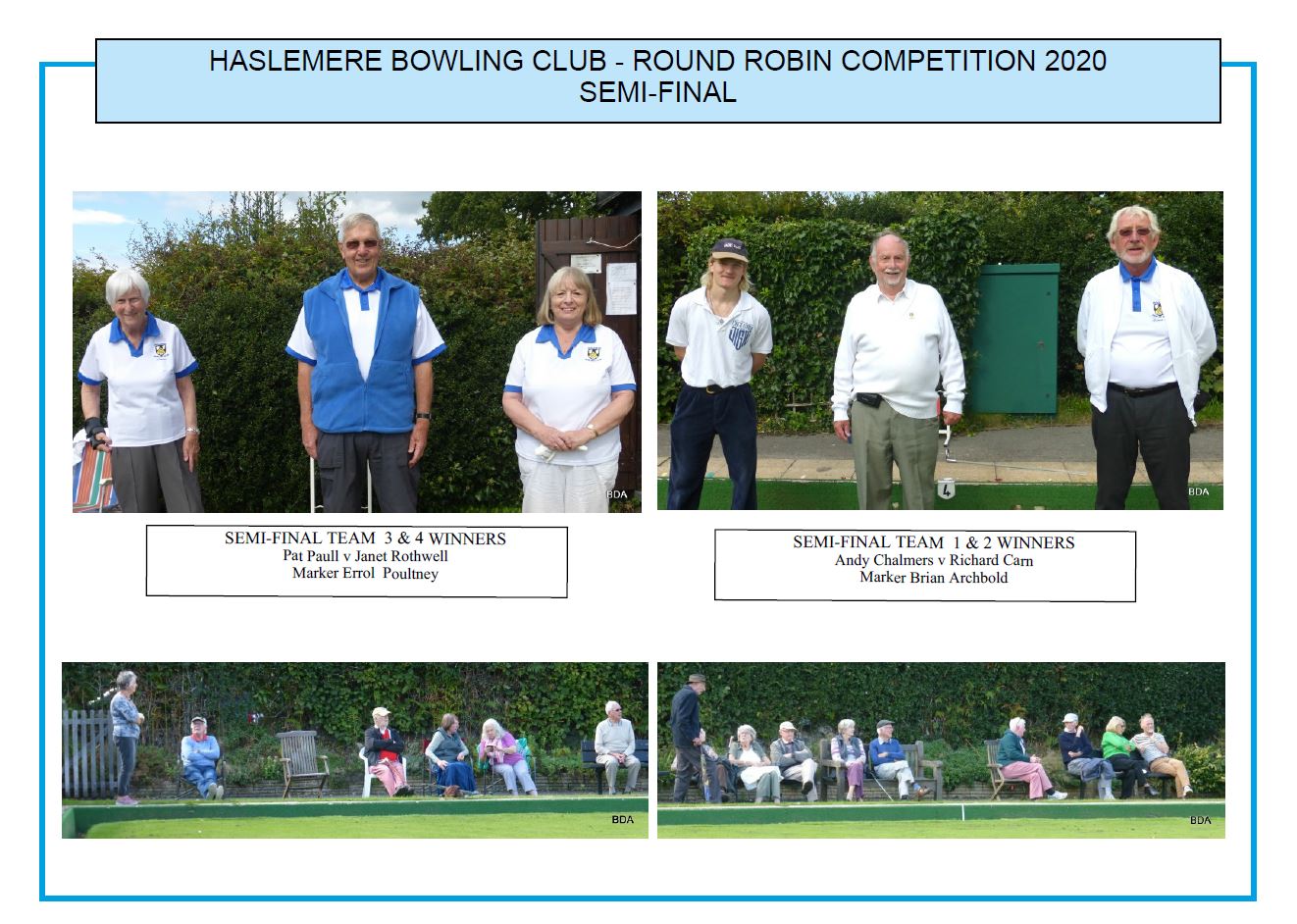 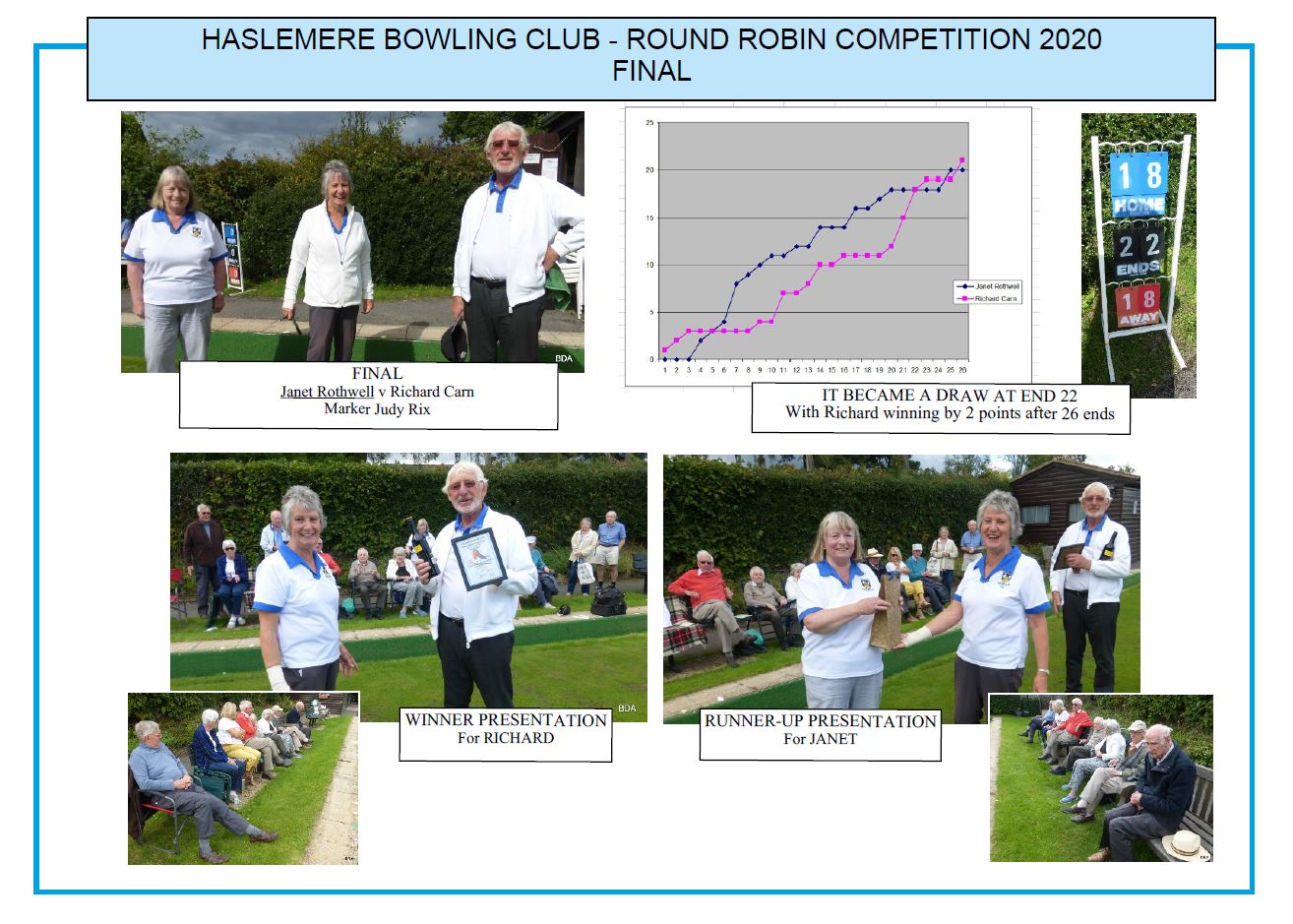 
Finalists at the 2019 competitions 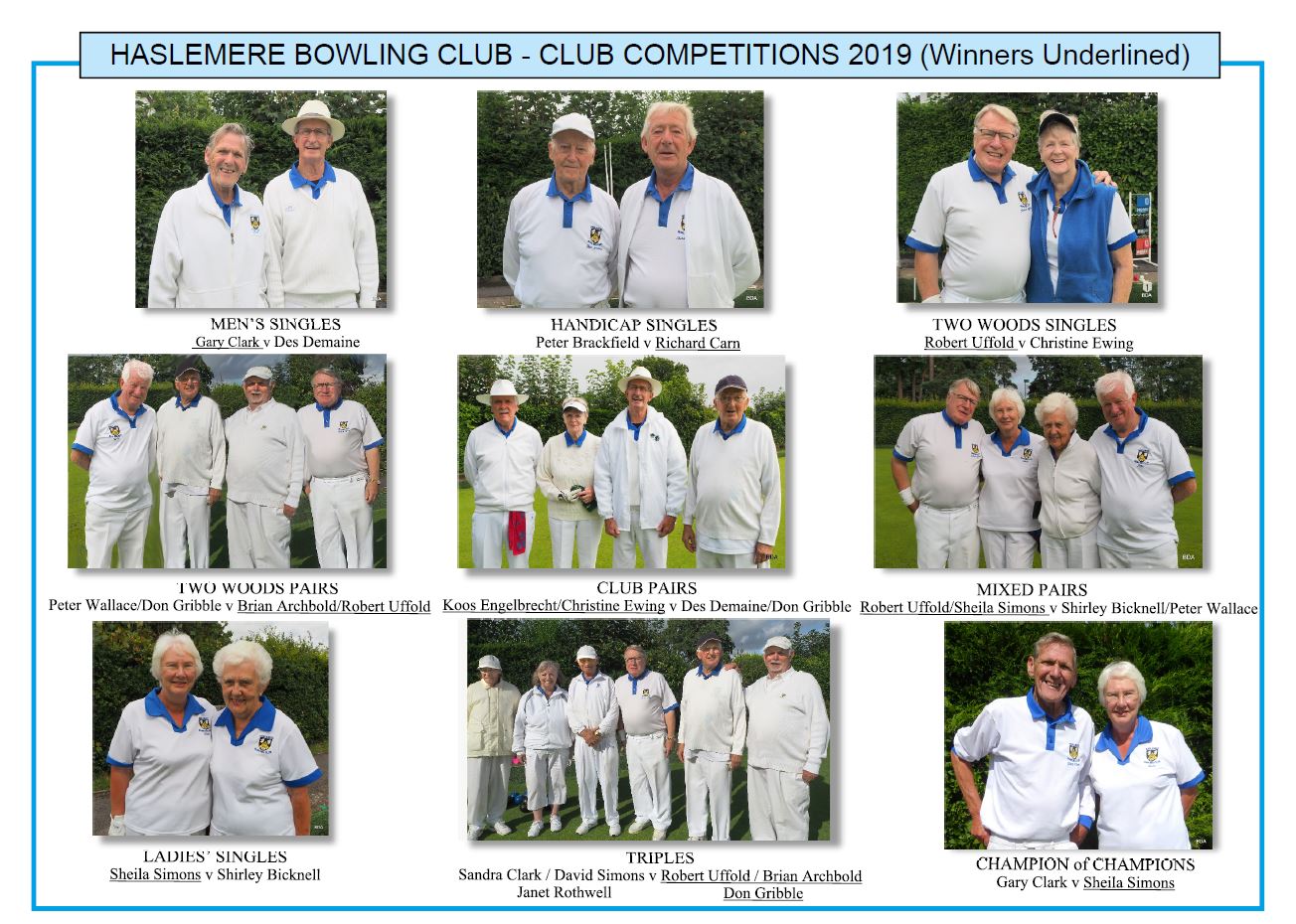 Pictures taken at the 2019 annual dinner 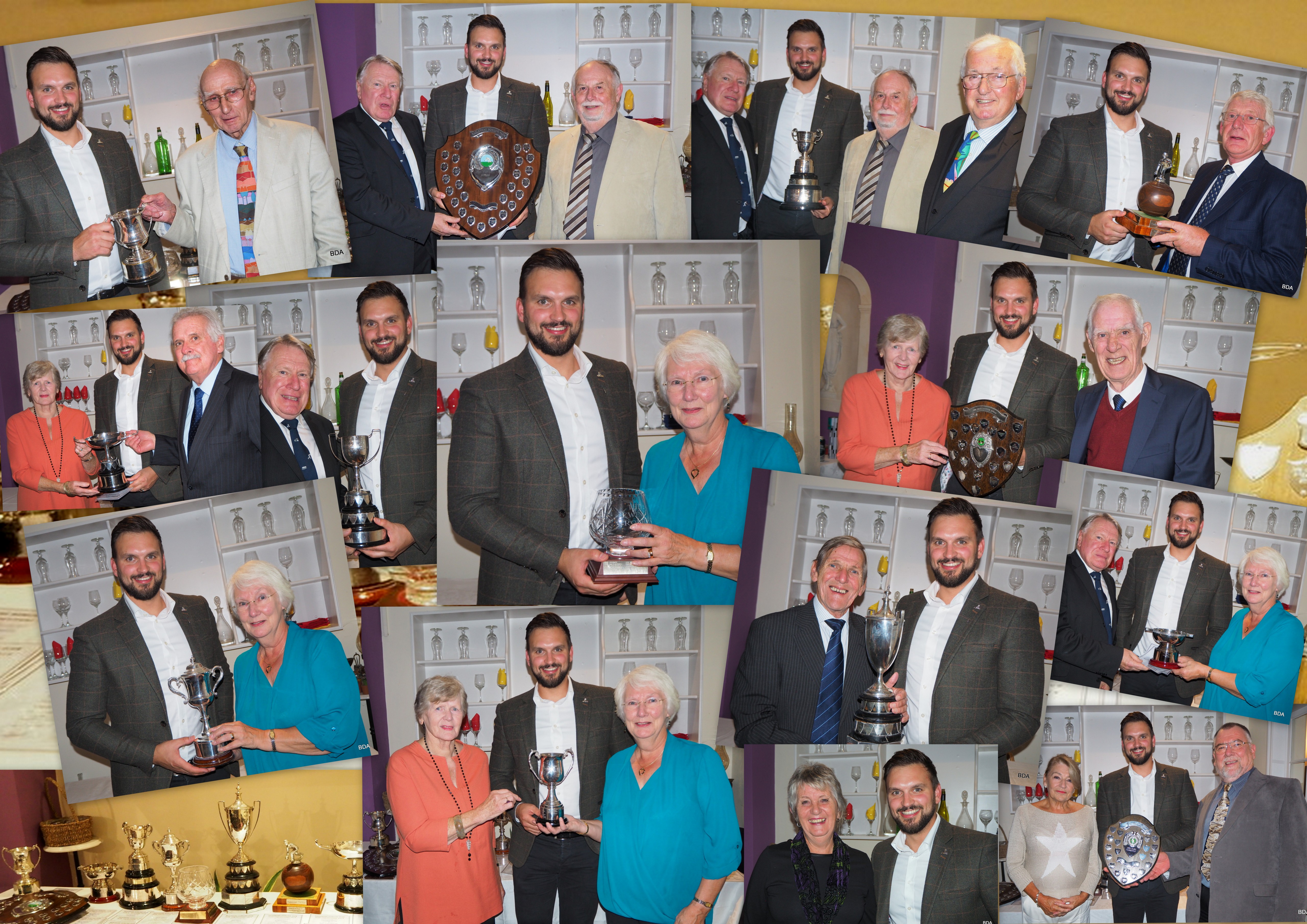 Finalists at the 2018 competitions

Click on a picture to see a larger pdf version

It is known that the club was founded in 1911 now some 110 years ago. The Victory Cup for presentation to the winner of the Men's Single competition appears to have been introduced shortly after the club moved to its location at the Haslemere Recreation Ground site in 1921. This is evident as the first name engraved is that of F White as winner in 1922.
The Victoria cup is the oldest trophy in the club’s current trophy collection and therefore also the most valuable to the club. There is no documentary evidence but it would appear that the cup whose full title Victoria Cup 1919 was also introduced in memory of those who served in the First World War. Of the nearly 100 member engravings it is significant that only member’s names engraved on the cup itself are the men’s singles competitions winners over the Second World War period and perhaps appropriate to the cup’s name.
A full record of the cup engraving can be viewed in a pdf table obtained by clicking on the cup image. Over the cups 100 years existence there are only 7 years without engraved names where it is assumed the men’s singles competition couldn’t be held. Of course, last year’s competition was not possible due to Covid but apart from this problem the competition has been held continuously since 1964. Alan Marchant has clearly been the most successful club bowler having won no less than 16 times, more recently John Greenfield, Robert Uffold and Richard Willey have been the more successful bowlers having won three times.

Haslemere Recreation Ground and Occupation by the Haslemere Bowling Club

On 9th March 1920 a letter was received by the Haslemere Urban District Council from Sir Algernon Nethuen, executor and trustee of the estate of the late Sir John Hutchinson offering land known as Water Tower Field as a gift to the Town for recreational use and as a memorial to the men of the town who served in the Great War. The land was offered to the Town as a free gift and free from all restrictions.

Early proposals discussed by the Council regarding the use of the ground included proposals for the provision of a bungalow, store, a general pavilion, ladies dressing room and Tool Shed. The Council were concerned that the Recreation Ground should be properly managed and a groundsman took occupation of the bungalow. By October 1921 our bowling club moved to the recreation ground and work begun to lay a bowling green, its final seeding taking place in April of that year.

The first pavilion for the bowls club was very rudimentary and an improved pavilion was erected by club members in the seventies using material salvaged from prefabs near Woolmer Hill. This was further improved by our current pavilion from plans produced by the then club president and built in 1994 (see details in Peter's article which can be accessed by clicking on the photograph below). Photographs taken during the dismantling of the second member constructed pavilion and construction of the current pavilion are shown below.

Note: Some links on these pages are PDF (Acrobat reader format).
Adobe Acrobat Reader can be downloaded here: